Traditional Farming in the Swiss Alps 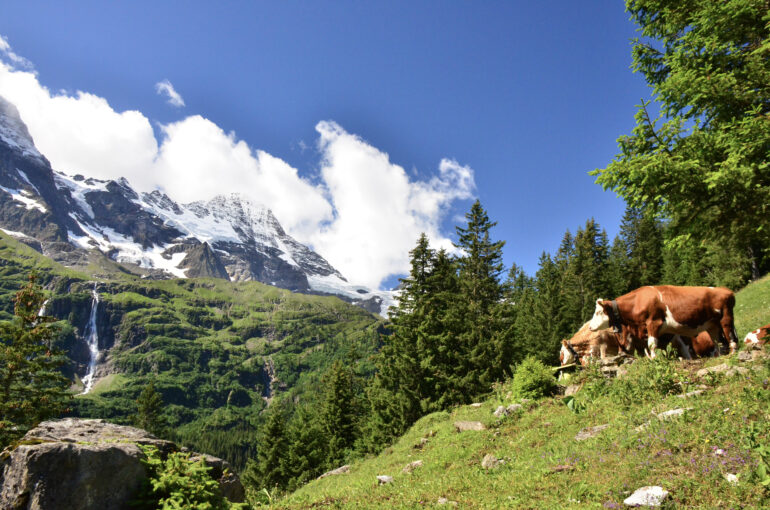 Cows graze on a steep hillside above the Lauterbrunnen Valley with Schmadribach Falls in the background.

As a traveler hiking through the Swiss Alps, you soon discover the many small farms dotting little meadows high in the mountains. Semi-vertical fields step up the hillsides toward centuries-old huts and barns. Small groups of cows graze and farming families collect hay. It’s not uncommon to see three or four generations stretched along a fence line making repairs together.

Switzerland is one of the richest and most expensive countries in the world, yet here are these hearty farmers swinging a scythe through the grass and selling their homemade cheese by the 100 grams.

How do they do it in today’s world? How do they compete with cheaper imported cheese? Why does this aspect of Swiss culture still thrive? The answer is easy. Subsistence farmers play a central role in the Swiss cultural consciousness. And the Swiss are determined to hold onto that piece of their identity. Making hay while the sun shines.

Farming in the Alps

In simple terms, an “alp” is a high mountain meadow – an open patch of grass and flowers, where you can raise cows and sheep and scratch a living from the soil. The mountain chain gets its name from these all-important meadows. You don’t live on an alp year-round. They are generally summer pastures where you take your cows in June and from which you bring them back down to your village home in September. Centuries ago, farmers (that is, nearly everyone) would spend their summers on the alp and winter in the village down in the valley.

Dairy farmers stay extremely busy in the summers. Cows need to be milked and cheese made daily. This is still often a wonderfully organic and timeless process. The farmer cultures the milk, heats it over a small fire, carefully stirs and watches it, then pulls it by hand into cheesecloth and presses it into huge molds. Cheese will be rubbed down and turned and attended to daily.

In addition to making cheese, farmers need to make hay (while the sun shines) for the winter months. Entire generations get in on the hard work, cutting the grass meadows often by hand with a scythe (many of the fields are too steep for machines). They let it dry in the sun, turning it, raking it up, and storing it in barns as winter feed for their animals. Many fields are hayed 2 or 3 times in one summer season. It’s extremely hard work. But most farmers tend to love haying season, looking forward to rhythms and routines and the honest work of it all.

As we sit behind our desks and computers, complaining of carpal tunnel and rush hour traffic, it’s hard not to admit that there’s a lot to admire in the hardy lifestyle of the Swiss farmers. Not to idealize it – there is no 8 hour work day (not even close) or sick leave, taking a vacation day, or early retirement – but they love it. The Heart of Swiss Culture

Swiss identity is tightly interwoven with the idea of the rugged, self-sufficient alpine farmer. This is Pa Ingalls raising his family in the Big Woods, or the cowboy driving cattle across the Texas plains. Today’s alpine farmer is who they all are, at a certain level, how they have lived and thrived in a fairly hostile climate for centuries. So the wider society nurtures, supports and celebrates them. Still, like so many things, this lifestyle is becoming endangered. Before WWII, 25% of the Swiss population worked in agriculture. Today it is only 3%, and they can’t do it without outside assistance.

Swiss Mountain Aid is a non-profit that organizes hundreds of volunteers and raises over $30 million/year, mainly from urban Swiss, to help aid their mountain brethren. According to Ivo Torrelli from the group, support for small Swiss farmers “has a lot to do with the Swiss sense of identity, with the history of Switzerland, and with the great Swiss tradition of helping out those in need. What it comes down to is that every Swiss is to some extent an Alpine dweller.”

Alpine farmers receive other help as well. Subsidized fuel costs and lower tax rates help control costs. Zero-interest loans or outright grants are available for infrastructure improvements. Import restrictions and guaranteed prices for some products help ensure a market. But the Swiss also support local farmers with their own choices at the store. You’ll see both imported eggs and Swiss eggs (hard to miss with the red and white cross) at the store. People regularly buy local cheese, milk and meat. And 99% of Swiss wine – yes there is such a thing – is consumed in Switzerland. The Swiss buy Swiss because they know their individual actions are key to the survival of this way of life. 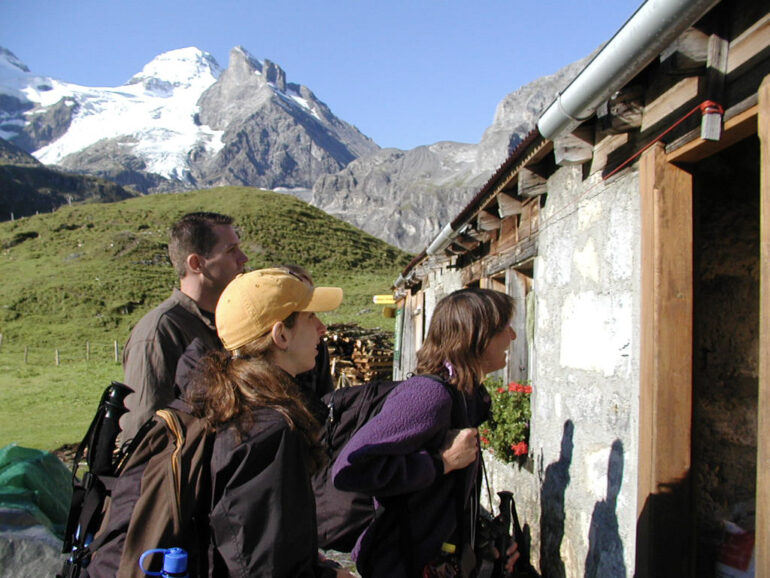 So as you hike through Switzerland, keep this in mind. The mountains are beautiful, yes, and the culture is also ancient and valuable. An integral part of Swiss identity, and one of the most interesting things about traveling to Switzerland. We can learn a lot about their celebration and support of their culture. We all appreciate the timelessness of a quaint Alp farm. So when you are there visiting, remember you, too, can do your part to support it.

We stay in the small mountain inns and family-run hotels, and buy our cheese and homemade sausage from a farm stand next door. When you have wine with dinner, try a Swiss Pinot or Fendent. You’ll have an easy time being a locavore here and you’ll support your local Alp at the same time. This way of life has defined the Swiss for hundreds of years and with luck and support, will survive many hundreds more. Staying the night at the historic Berghotel Obersteinberg is a highlight for everyone on our Bernese Oberland tours. It’s peaceful, beautiful, and inspiring.
READ MORE It turns out the American fried potato craze is not unique, in fact it's a global phenomenon. People everywhere love fried potatoes and Switzerland is no except
READ MORE Any conversation about Swiss culture will quickly point out the craftsmanship at the heart of everything the Swiss do. And anyone discussing quality and craft w
READ MORE